Embassy Interviews
Let's go to the Embassy to learn about the food of Southeast Asian countries!
Part 4: The Republic of Singapore

CROSSCUT ASIA is an online film festival co-hosted by the Japan Foundation Asia Center and the Tokyo International Film Festival (TIFF), which will be held from January 21 to February 3, 2022. As a related project, we will start a series of articles to deepen your interest in Southeast Asian food. The five-part series will focus on the food culture of five countries. The fourth country is the Republic of Singapore. We were specially invited to the Embassy to speak with Singapore’s Ambassador to Japan, Mr. Peter Tan Hai Chuan.

The Singapore Embassy is located in the middle of Torii-zaka, not far from Azabu Juban Station, in a large compound surrounded by trees. The ambassador welcomed us into the Embassy and brought us to the kitchen, where he was going to cook for us. The Ambassador began to talk openly with us as he prepared with a practiced hand Roti Udang and Roti Babi – deep-fried bread with prawn paste and minced pork, and Laksa, a noodle dish made with coconut milk and dried prawn paste. Let the interview begin!

Laksa is a creamy coconut milk based soup which, infused with aroma of seafood, is irresistibly appetizing. We were told that the secret behind this delicious bowl is the “thick fried tofu”.

“To tell you the truth, I rarely eat Singaporean food in Japan,” began Singapore’s Ambassador to Japan, Mr. Peter Tan Hai Chuan. I was a bit surprised by his words.

“Of course, when we invite guests to the ambassador’s residence, we serve Singaporean food. But what I want to tell you is that I love Japanese food very much. Tonkatsu, ramen, sushi, and my wife’s favorite, soba. I spend most of my private mealtime exploring Japanese food.

The Ambassador’s extraordinary dedication to food can be seen in the way he stands in the kitchen and prepares his own food, and in the way he talks about it.

“You could say that eating is simply an act to stay alive. But I don’t think so. Meals bring back memories, they bring out culture. They convey history. It means that you can understand a country through its food. I call it ‘food diplomacy’. When you hear the word ‘diplomacy’, you may think it is for politics, economy, or business, but that is just the ‘hard’ side of the word. On the other hand, there is diplomacy of exchange through culture and society, as represented by food. I’m very interested in promoting this ‘soft’ side of diplomacy too.”

I asked him why.

“Despite the coronavirus pandemic, Singapore and Japan have maintained a very strong political, economic, and business relationship, facilitated through online technology. However, cultural and social exchanges cannot be easily replaced by technology.”

Indeed, even with the spread of online technology, I don’t think it can replace direct travel, like tourism, as a means to learn about culture and society.

“That’s right. That is why I think it is important for me as ambassador to invite Japanese guests to enjoy Singaporean cuisine at the ambassador’s residence, to develop Singapore-Japanese fusion cuisine myself, and to introduce their attractiveness to the Singaporean people. In this way, we can deepen our understanding and raise our awareness of each other, so that when the border reopens, we can visit each other in person again.”

The Ambassador answered our interview in fluent Japanese. He stayed in Kanazawa for two weeks when he was in junior high school and studied at Himeji Dokkyo University as an exchange student for about six weeks when he was in college. He has served as First Secretary, as Counsellor, and later as Deputy Chief of Mission at the Singapore Embassy in Japan

I was able to hear a fascinating story from the Ambassador about food diplomacy. I think it would be wonderful if this article could also be one of those initiatives. Now let’s learn more about the food culture of Singapore. When you invite guests to the Ambassador’s residence, what kind of food do you serve?

“We often serve Laksa, chili crab, chicken rice, and Bak Kut Teh. If you ask Japanese what their favorite Singaporean dish is, one of these four dishes will most probably be mentioned.”

Chili crab, as the name suggests, is stir-fried crab with chili sauce. Chicken rice, also written in Chinese characters as “Hainanese chicken rice,” is a dish of boiled chicken and rice cooked in chicken stock. Bak Kut Teh, written in characters “meat-bone-soup,” is a stew of pork bones mixed with various spices.

The Ambassador went on to talk about how he thought about serving these dishes.

“Most of the meals at the ambassador’s residence, especially dinners, are course meals, so it is important to think about the combination and order in which the dishes will be served. In Japanese kaiseki cuisine, too, the order of the dishes is determined by sakizuke (first appetizer), oshinogi (second appetizer), owan (a small bowl of soup) and so on, right? In addition to serving delicious food, I am always thinking about how to make it more enjoyable for my guests. For example, the Roti Babi I just prepared is a dish that is enjoyed as a snack in Singapore, but because it is simple enough to be eaten in one bite, I can serve it as an appetizer in the course.

On the day of our interview, we were served two kinds: Roti Babi with minced pork and Roti Udang with shrimp paste. I was told that because bread changes color quickly, frying it in low temperature oil makes it look more beautiful.

I was impressed by the Ambassador’s way of thinking about food as something that evokes memories, rather than as a mere “act”. I asked him if there is any difficulty in procuring ingredients when making Singaporean dishes in Japan.

“Of course, we can’t have all the local ingredients and seasonings, but I think we just need to find alternatives. Laksa is originally made with rice noodles and fish paste, but these can be substituted with pasta and other types of fish paste. Chili crab is also originally made with mud crab, but the soft shell crab, king crab, and snow crab available in Japan are also great. I have also discovered that miso can be a substitute for the bean paste that is often used as a seasoning in Singapore.”

The list of alternatives goes on and on. The Ambassador’s deep knowledge of Japanese food may have helped him, but I also felt that this was a glimpse of the flexibility of Singapore as a multi-ethnic and multi-cultural country.

“Singapore was founded by immigrants of various ethnicities such as Chinese, Malay, Indian, and Eurasian, and inter-ethnic marriages have been common. This is reflected in the food culture. Peranakans are people with Chinese and Malay ethnic backgrounds, and Peranakan cuisine, which is a part of Singaporean cuisine, is also a mixture of both ethnic cultures. The bowl and plate I just served you Laksa and Roti Babi in are also from the Peranakan culture.”

I picked up the plate and looked at it carefully. The patterns and color schemes are both Chinese and Southeast Asian, yet they are different from either and have an original look. Instead of thinking of alternatives as substitutes, one can think of them as flexibility for creating new originals. Perhaps that is what makes Singaporean food so appealing.

“In my opinion, Singaporean cuisine is a kind of fusion style. In Japan, there is a culture of creative cuisine. I was not a big fan of pasta before I visited Japan, but after I discovered Japanese-style pasta, it became my favorite. The food culture of Singapore has also developed through such fusion and will continue to evolve as a more global cuisine.”

A beautiful bowl with turquoise green and pink colors. These colors are often used in Peranakan culture. It makes the food look even more delicious when served on it.

Through conversations with the Ambassador, my understanding of Singaporean cuisine deepened. It is truly a diplomacy of food. I am now looking forward to visiting Singapore after the pandemic is over.

“I would like to recommend a visit to the Hawker Center. Singapore’s hawker culture was added to UNESCO’s Intangible Cultural Heritage list in December 2020. Hawker is a word meaning ‘street vendor’ who sells food with a cart, and it is a historical food culture that has been popular among the people even before independence in 1965. In the past, there were problems of hygiene and job security for hawkers. To solve these problems, after independence the government created this center to gather hawkers together. Since then, the Hawker Center has become the pride of Singapore as a large community space for all, rich and poor, where all the ethnic groups that make up Singapore come together.” 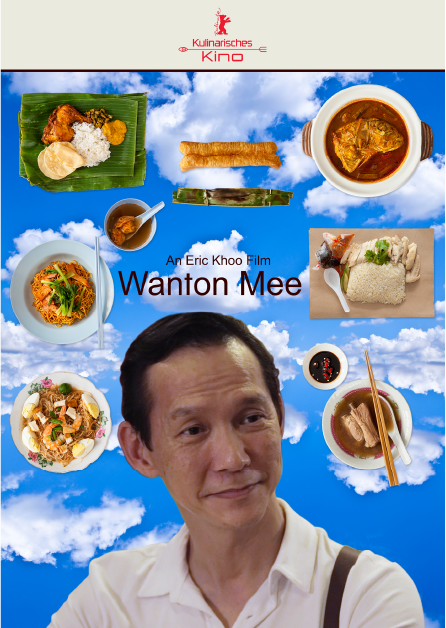